Overview of the foreign business of the Russian Railways holding 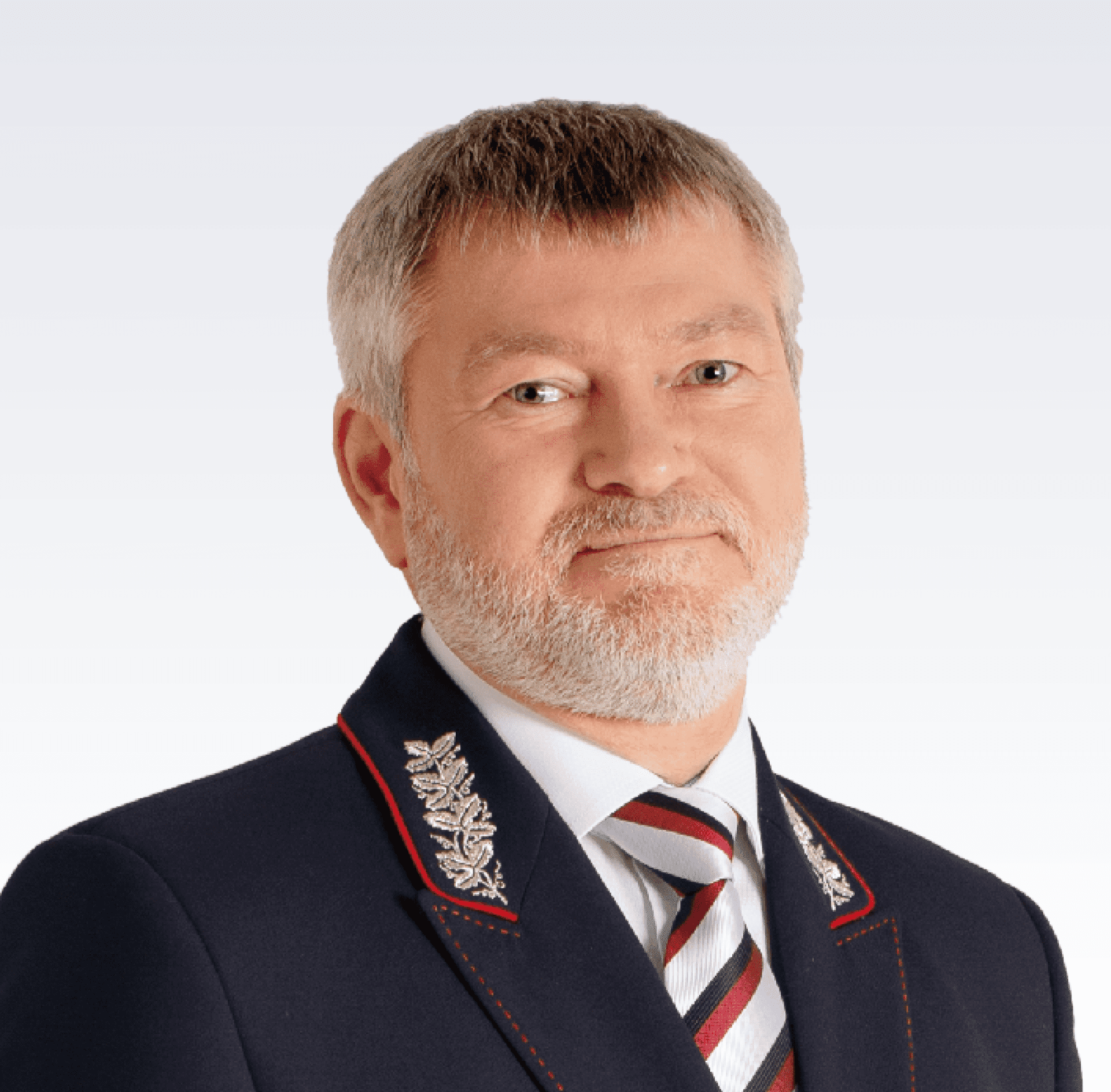 In a whole new environment, the Russian Railways Group keeps feet firmly on the ground as a global business. Our services won strong customer recognition for their high reliability, while transit transportation volumes entrusted with us grew by a third compared to 2019. The most sophisticated infrastructure facilities we are building in the Republic of Serbia received the highest praise from the country’s government. With over 100 initiatives being implemented in cooperation with international industry organisations, we are geared to work towards even more ambitious projects.
Sergey Pavlov First Deputy CEO of Russian Railways

Overview of the foreign business of the Russian Railways holding

Russian Railways continues developing its foreign business, among other things, by expanding its footprint and promoting the Group’s export-oriented portfolio centred on:

The long-term priorities of Russian Railways’ business abroad are outlined in the Foreign Operations Strategy approved by the Company’s Management Board. The Strategy was aligned with the Long-Term Development Programme and Russian Railways’ Action Plan to Deliver against the Russian President’s Address to the Federal Assembly in 2018–2020.

In 2020, the Russian Railways Group managed to maintain high business volumes and further expand its global footprint. The Company exceeded all targets in terms of transit transportation by implementing initiatives aimed at creating efficient transportation routes and customer-centric transit services. To this end, Russian Railways joins efforts with over 10 international organisations to improve the regulatory framework and work out strategic development priorities.

In 2020, the Company met its targets in terms of revenue from foreign operationsIn line with Russian Railways’ Action Plan to Deliver against the Russian President’s Address to the Federal Assembly in 2018–2020 (Russian Railways’ Order No. 635r dated 20 March 2020).and EBITDA.

The Council for Rail Transport of the Commonwealth Member States remains the key international body ensuring technological continuity and practical interaction across the 1,520 mm gauge network. In 2020, the Council held two meetings in absentia. The 73rd meeting of the Council approved the draft Conceptual Framework for Strategic Development of the Railway Transport through 2030, which was submitted to the CIS Executive Committee.

As for Eurasian integration, we delivered on all commitments under the roadmap for interaction between Russian Railways and the Eurasian Economic Commission. The Company assists the Eurasian Economic Union (EAEU) in developing the regulatory framework. We are finalising negotiations on the draft roadmap for implementing a concerted (coordinated) transport policy in 2021–2023, which provides for the use of electronic navigation seals for goods in transit.

In 2020, the Company continued its cooperation with Chinese partners, mostly China Railway, with a view to developing container transit, enhancing digitalisation, expanding the range of cargoes transported, etc.

Given the Russian Government’s resolution to subsidise transit routes, we took consistent steps to engage foreign customers and attract additional cargo traffic to the Trans-Siberian Railway. November saw the first full-length container train dispatched from Japan to Europe. In 2020, Russian Railways opened a representative office in Japan to expand its presence in the region’s most promising market.

As part of our transportation and logistics initiatives to promote the International North–South Transport Corridor, we are working to launch a regular container service from India to Russia. The authorised logistics operators agreed on basic fares and guaranteed delivery times for transportation of Indian cargoes by container trains.

Russian Railways’ membership in international organisations was a key to strengthening its image as a green company. The Company’s contribution to the goals of sustainable development and climate agenda includes participation in the task forces of the UN organisations and the International Union of Railways (UIC).

On 15 July 2020, Oleg Belozerov, CEO and Chairman of the Management Board of Russian Railways, signed the UIC Declaration on Sustainable Mobility, which proclaims railway companies’ commitment to reducing specific energy consumption and CO2 emissions, achieving carbon neutrality by 2050, and reaching sustainable development goals. In doing so, the Company opted for an active contribution to the development of sustainable green transport and the implementation of the Paris Agreement on climate change response.

Russian Railways contributes to the SDG Rail Index on the UIC Sustainability Platform, which aims to create a rating system for railway companies based on their contribution to the achievement of sustainable development goals. SDG Rail Index is likely to facilitate easier access to green bonds and sustainable finance instruments for railway undertakings.

During the pandemic, Russian Railways, as well as more than 60 other UIC members and representatives of 14 international organisations, were actively involved in the activities of the COVID-19 Task Force established by the UIC Headquarters. These efforts resulted in 8 recommended practices to combat the pandemic.

Following negotiations, the OSJD member countries agreed to preserve virtually all international passenger and direct train routes running between them before the pandemic-related restrictions were imposed. This will help resume international railway traffic in a fast-track and simplified procedure should the national governments decide to do so.

A key project being implemented part of the UIC Asia–Pacific Regional Assembly, INTERTRAN helps reduce the cargo handling time in intermodal shipping from ports of Japan, China and South Korea through the port of Vladivostok by four days. The project was initiated by Russian Railways in 2017. The technology makes intermodal shipping support fully electronic and can be used by all operators and freight forwarders. In 2020, the Company continued to roll out the INTERTRAN technology across all its container handling stations.

Despite the pandemic challenges, the Company honoured all its contractual obligations under the ongoing infrastructure projects.

In the Republic of Serbia, key construction phases were completed on the two most sophisticated infrastructure facilities on the Belgrade–Budapest route, with core viaduct structures erected in the Danube floodplain and the two bores connected at Čortanovci-Tunnel. Under the second contract, the Company started constructing a single dispatch centre for train traffic control in Serbia and designing the renovation of the Valjevo–Vrbnica–Montenegro border route. The Company opened a centre of excellence in Belgrade to further promote Russian rail technologies in the region. The Serbian leaders inspected the construction site and highly appreciated Russian Railways’ efforts. Negotiations are ongoing on the terms of the third contract.

The Company continued to honour its commitments under railway management agreements in Mongolia and Armenia. In 2020, Ulaanbaatar RailwaysRussian Railways acts as trust manager in respect of a 50% stake of the Russian Federation in Ulaanbaatar Railways.achieved strong performance in freight traffic, with transportation volumes amounting to 30 mt (up 6.6% y-o-y) and freight turnover reaching 19 bn tkm (up 9.1% y-o-y).

Projects in Egypt, Vietnam, India and other countries were being reviewed, too.

The Russian Railways Group developed and approved its export-oriented portfolio to strengthen its positions in focus markets. The portfolio currently includes over 150 products and services. The Company’s Management Board adopted a marketing concept to promote it. Russian Railways was also working to create a digital environment for international project management and develop an incentive scheme for business efforts abroad.